Before that, let me set some additional context: I was on a short whistle-stop holiday to attend a friend’s wedding in Copenhagen. Having arrived in the morning just the day before, I’d already embarked on a YOLO schedule to get the most out of my short 3 days in Denmark. The first stop after brunch was Christiania (where I tried a cookie for the first time in my life) in the afternoon followed by a late night out for dinner and drinks at Kødbyen (the meat packing district). 4 hours later, I dragged my jet-lagged, alcohol-infused and drugged self out of a warm bed to go on a Sunrise Running Tour (and the sadistic person that I am, I’d made a special request for an additional 2 km to make it a round 10 km run instead of just going with their standard 8 km tour and to top it off, this was on the morning of the day of my friend’s wedding).

Lena from Go! Running Copenhagen met me at the door of

my Airbnb. She was (quite literally!) bright and chirpy in her neon orange running tee-shirt. The heavy mantle of sleep was very quickly thrown off as Lena set a clipped pace and chatted with me as we ran (and I had to keep up the conversation!).

It was an amazing experience. The streets of Copenhagen were very quiet and empty but for the handful of crazy runners or party-goers who had not gone home yet. And having the sights all to myself without having to compete with the usual rabid crowd of camera clicking tourists being offloaded from those large tour buses was priceless. 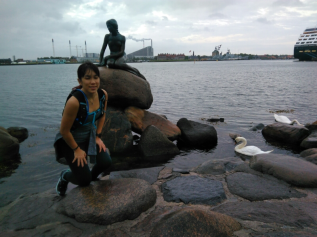 At the statue of the Little Mermaid, being the only tourist there, it was so peaceful and serene, it felt like something from the twilight zone (imagine mass alien abductions with me and my running tour guide being the last human beings on earth). And the only photo-bombing tourists were two swans that had the audacity to dive and show off their butts to the camera just as Lena was about to take my picture with the Mermaid. Well, at least I got 2 fairytales for the price of 1!

Lena was an awesome guide, showing me both the official side of Copenhagen as well as regaling me stories from a local perspective and letting me in on the side of Copenhagen that was off the beaten path. She was suitably impressed with my Christiania experience and that became the highlight of her FB post.

Our route took us past Nyhavn, the Playhouse, the Admiral hotel, the Amalienborg, Larsen Plads, the Mersk HQ, the Opera House, the Little Mermaid, Kastellet, the previous Prime Minister’s very low-key residence, the Botanic Gardens, the old Townhall and the Cityhall, the shopping district, Christiansborg and the Royal Library.

Along the way, we talked about children, life, love, running (of course!) and pretty much anything under the sun. Lena even suggested running routes popular with single and available runners should I wish to try and snag a date during the rest of my limited time in Copenhagen!

It turned out to be such easy running in the wonderful weather, after saying goodbye to Lena, I made for another 2 km before heading off for a good Danish breakfast and the wedding.

For all you running enthusiasts out there, Go! Running apparently has running guides in more than 40 cities around the world. I know that this will be something I will be including in my itinerary on my travels abroad next time. Who knows… maybe I will start Go! Running Singapore*!

*p.s: I just checked and that slot is not yet taken.

1 Response to Sunrise Running in Copenhagen